The Center for Diagnostics and Therapeutics is an interdisciplinary initiative to realize viable applications of research discoveries.
Read More 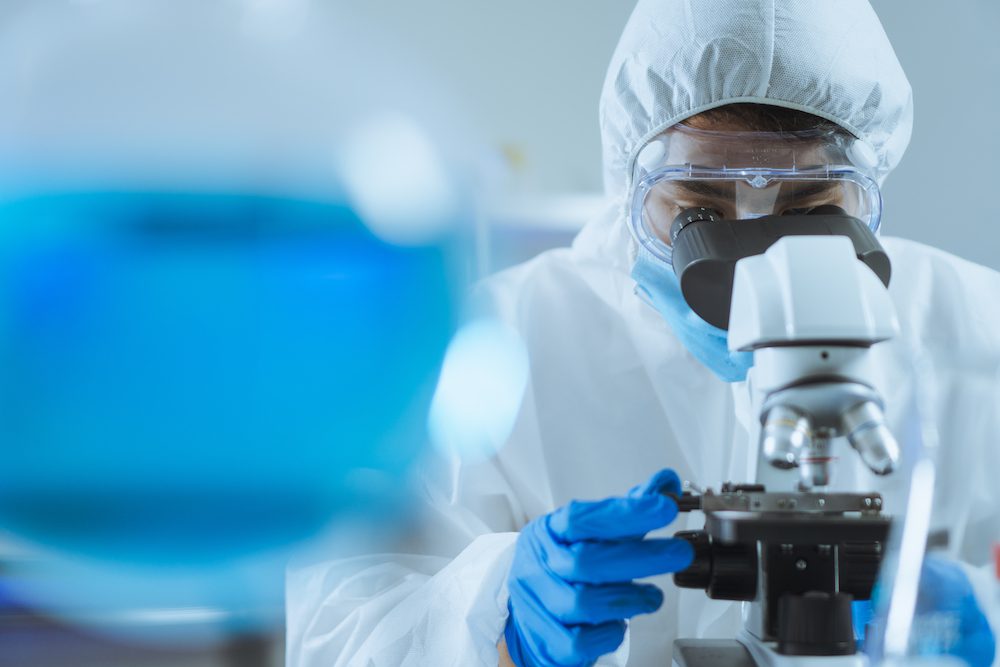 Georgia State University researchers are partnering with the University of Minnesota and other institutions to establish a new Midwest Antiviral Drug Discovery (AViDD) Center. The scientists have been awarded more than $6 million in grant funding to conduct antiviral therapeutic development, medicinal chemistry and drug design work to build a pipeline of antiviral drugs targeting SARS-CoV-2 and other viruses. Read More>>

The 7T MRI has Arrived! 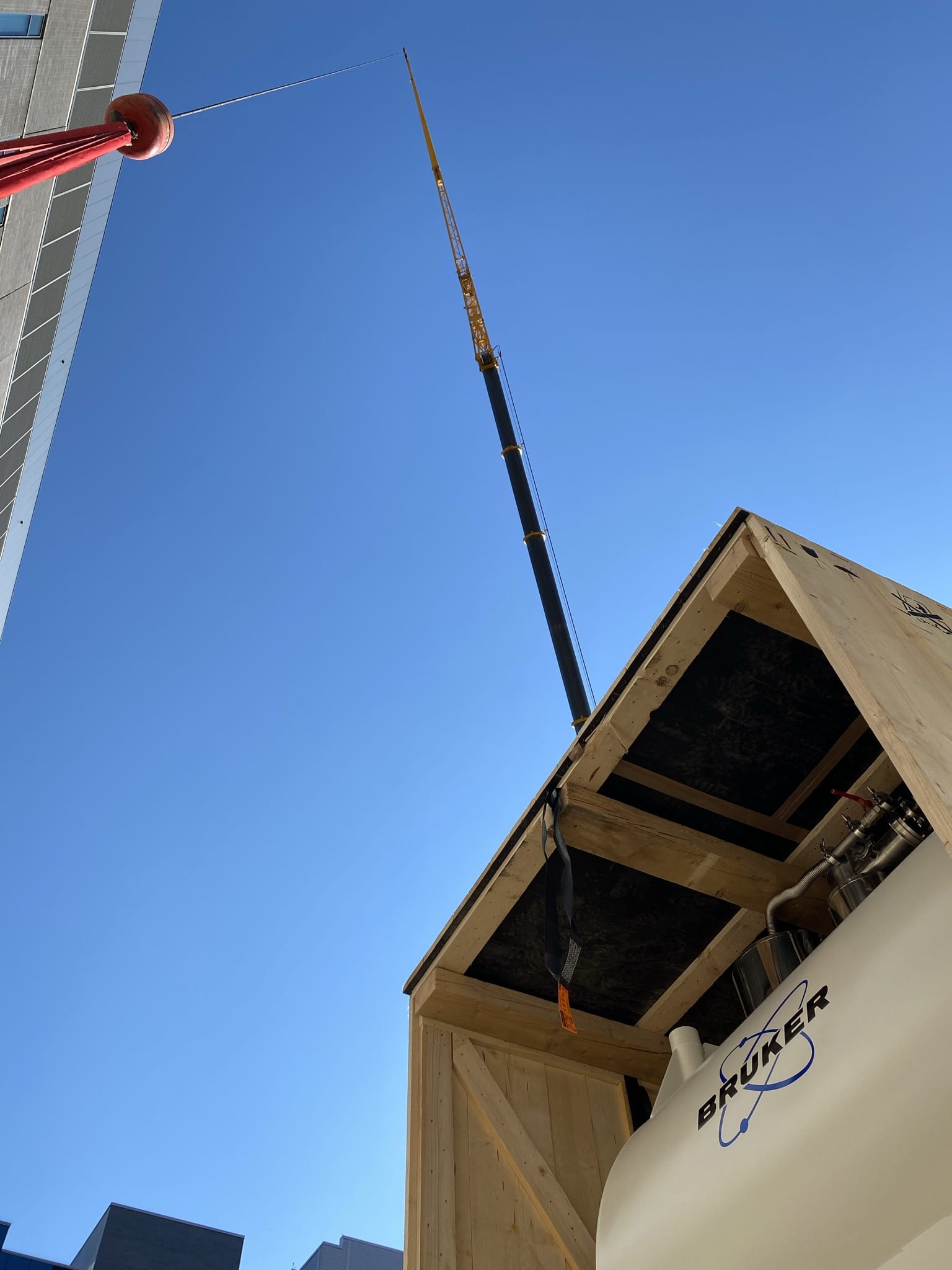 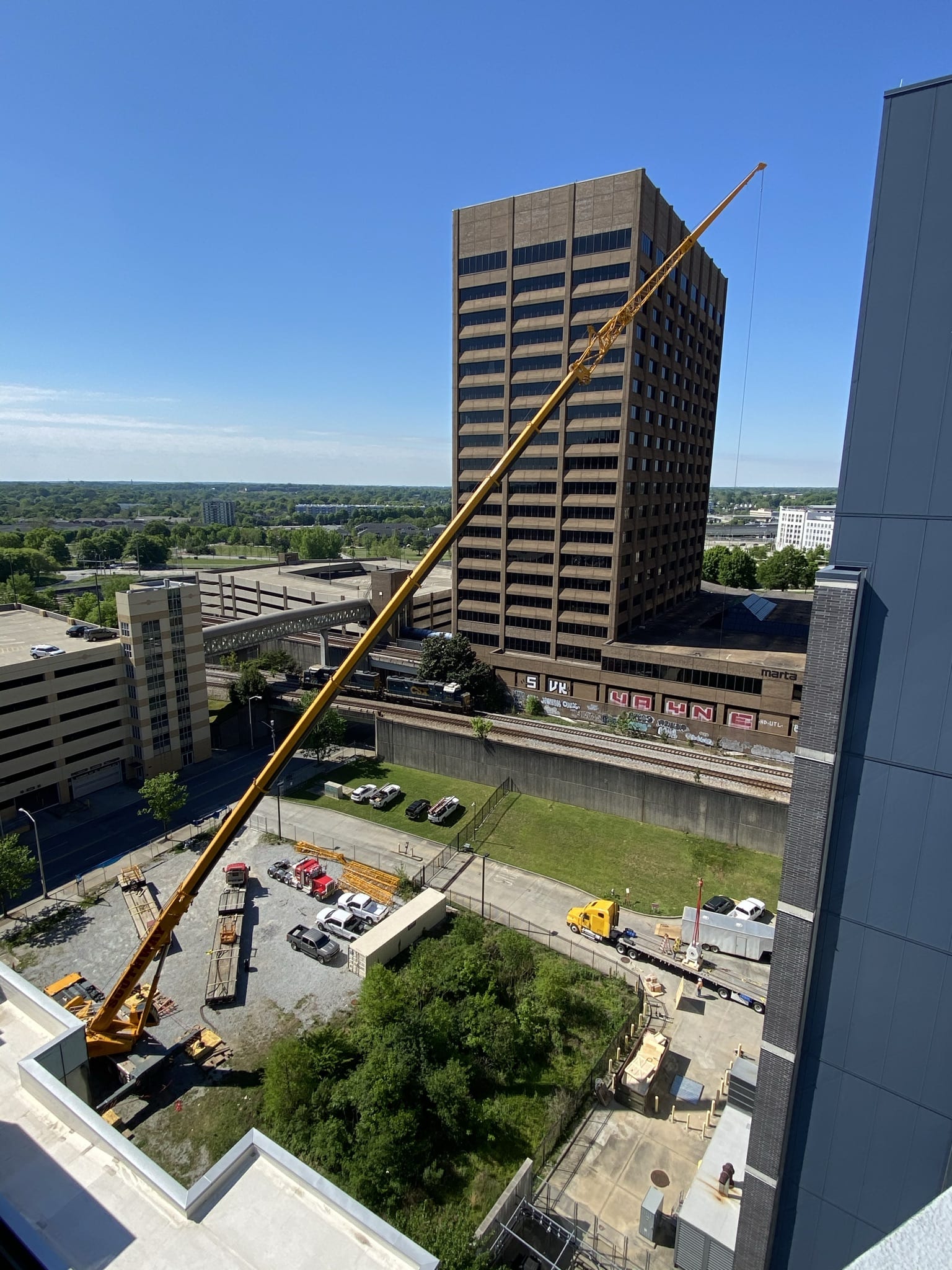 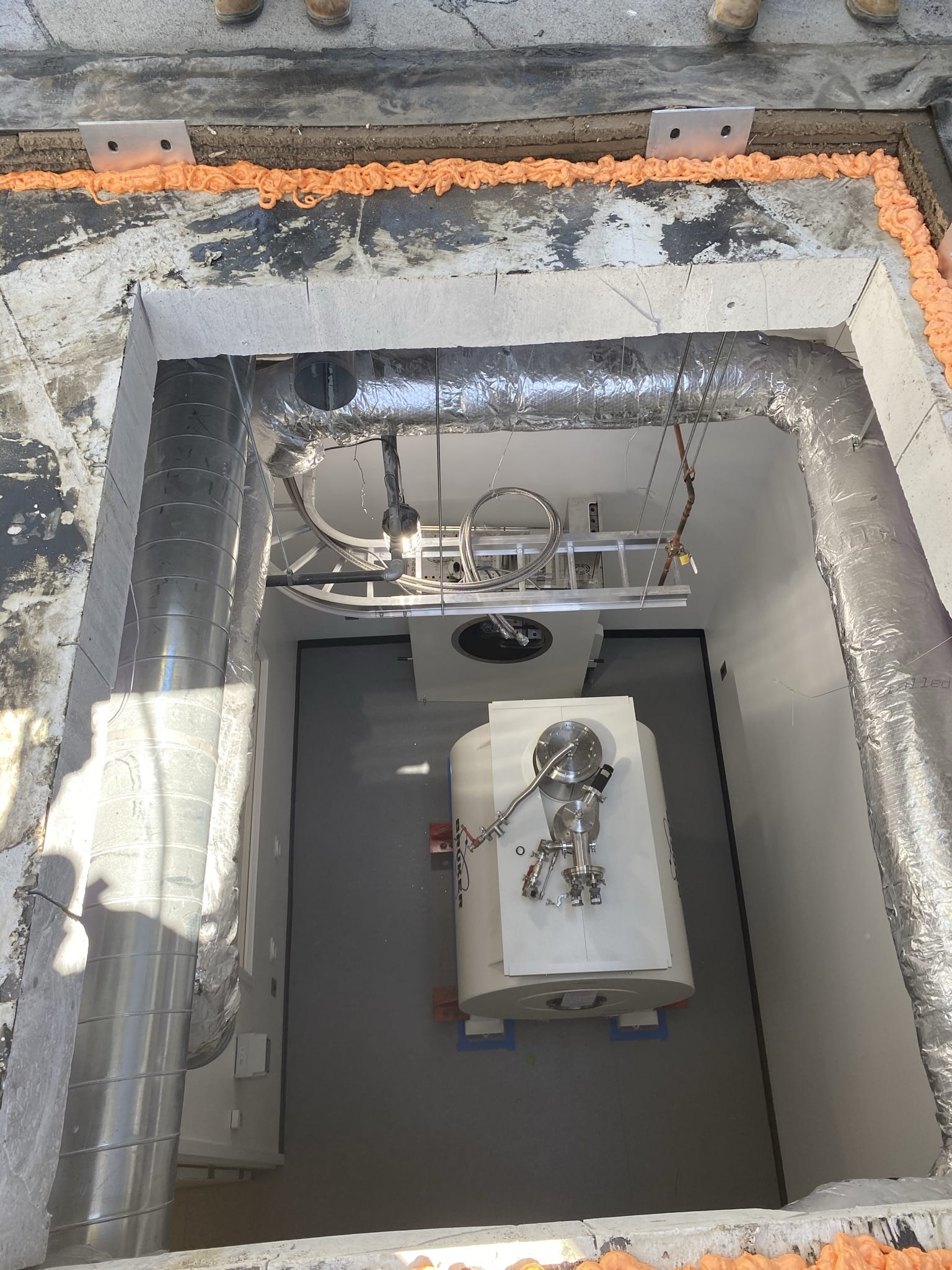 A $600,000 grant from the National Institutes of Health (NIH), with matching funding from Georgia State University, will bring a 7 Tesla (7T) magnetic resonance imaging (MRI) machine to Georgia State.

MRI scanners use powerful magnets to produce three-dimensional images of anatomical structures. High-field instruments such as the 7T are distinguished by the strength of the magnetic field, which allows much clearer resolution for research and disease diagnosis. Compared to the more common 3T MRI imager, the 7T produces an unprecedented level of detail and allows researchers to perform non-invasive imaging of microscopic structures inside the bodies and brains of living animals.

The addition of this new technology, used in a handful of universities in the Southeast, will make Georgia State a hub for MRI research, allowing faculty to conduct animal research using one of the world’s strongest imaging machines available for the detection of disease.

“This is high-impact stuff,” said Jenny Yang, Regents’ Professor of Chemistry and principal investigator on the grant. “Not only will this technology provide better research results, it also brings us to the forefront of industry and educational leadership.” Read More »

Jenny Yang, a Regents’ Professor of chemistry at Georgia State University and the associate director of the Center for Diagnostics and Therapeutics, has been selected as a National Academy of Inventors (NAI) Fellow, the academy board announced on Tuesday.

Yang, who holds 17 U.S. and 18 foreign patents in the field of protein engineering, is the first professor from Georgia State to be awarded an NAI Fellowship. She is one of 168 academic inventors who will be inducted during the annual NAI meeting on April 10 at the Heard Museum in Phoenix.

“I’m determined to make an impact in biomedical research and human health as a creative researcher as well as an innovative educator,” said Yang, who started her faculty career 23 years ago at Georgia State. “That I received such an honor at Georgia State means a lot.”
Read More » 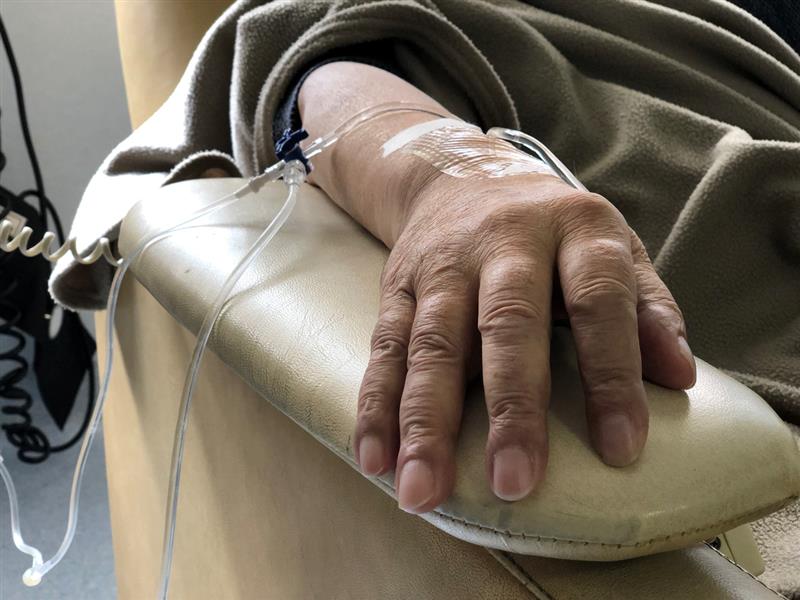 Yuan Liu, professor in the Biology Department at Georgia State University, has developed a novel form of immunotherapy that has the potential to provide long-lasting protection against any type of cancer.

With new funding and support from Biolocity, a philanthropic, multi-institutional network that works to accelerate the commercialization of university medical technologies, she is advancing this technology closer to clinical trial.

One way cancer grows and spreads is by subverting a person’s natural immune response, making it difficult for the body to recognize cancer cells are foreign. Most immunotherapy drugs work by training the immune system to attack cancer cells, or by boosting the immune response. While immunotherapy has revolutionized the treatment of tumors, the drugs only work for a limited number of patients.

Liu’s drug works differently, by unleashing macrophages, the cells that initiate and drive the immune response and play a key role in whether the immune system eliminates or tolerates cancer cells. Instead of injecting effector cells that direct the body to attack a particular type of cancer, Liu’s technology fundamentally modifies the patient’s immune system to recognize and target all types of cancer.
Read More » 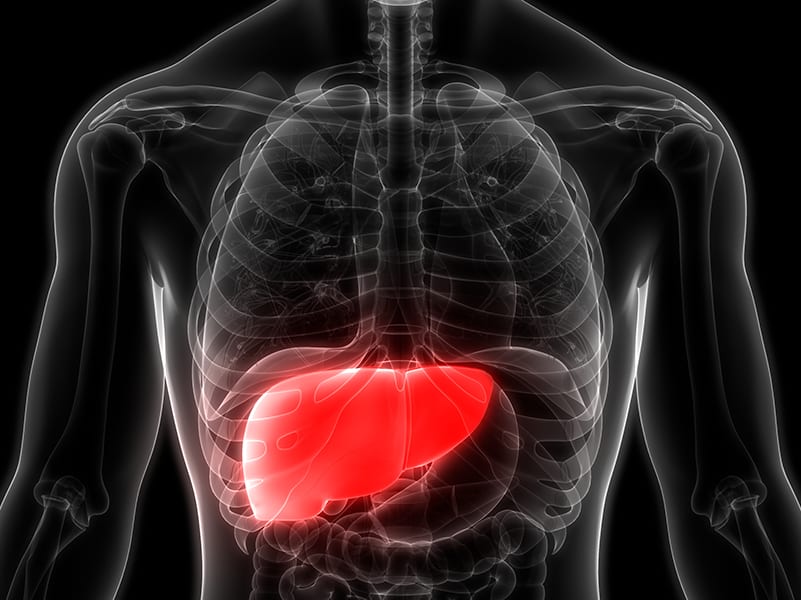 “It’s a revolutionary change for the field as the first robust detection of the early stage of liver fibrosis,” said Jenny Yang, a Regents’ Professor in Chemistry at Georgia State and the associate director of the university’s Center for Diagnostics and Therapeutics. “This would help doctors monitor treatment before it is irreversible and help pharmaceutical companies to select the right patients for clinical trials or identify subjects for drug discovery.” Read More »

A local start-up, life sciences company founded by Dr. Jenny Yang, Regents’ Professor of Biochemistry at Georgia State University, has received a $2 million federal grant to develop improved magnetic resonance imaging (MRI) contrast agents for the early detection of liver cancers and other cancers, such as uveal melanoma or eye cancer, that have metastasized to the liver. Read More »

ATLANTA—A protein designed by researchers at Georgia State University can effectively target a cell surface receptor linked to a number of diseases, showing potential as a therapeutic treatment for an array of illnesses, including cancer, according to the research team.

ProAgio, which is created from a human protein, targets the cell surface receptor integrin αVβ₃ at a novel site that has not been targeted by other scientists. The researchers found ProAgio induces apoptosis, or programmed cell death, of cells that express integrin αVβ₃. This integrin has been a focus for drug development because abnormal expression of αVβ₃ is linked to the development and progression of a number of diseases.

The findings are reported in the journal Nature Communications.

“This integrin pair, αVβ₃, is not expressed in high levels in normal tissue,” said Zhi-Ren Liu, lead author of the study and professor in the Department of Biology at Georgia State. “In most cases, it’s associated with a number of different pathological conditions. Therefore, it constitutes a very good target for multiple disease treatment.” Read More »

ATLANTA—A study led by researchers at Georgia State University provides new insights into the molecular basis of human diseases resulting from mutations in the calcium-sensing receptor (CaSR), a protein found in cell membranes.

Their findings, published Friday (May 27) in the journal Science Advances, may assist in the development of novel receptor-based therapeutics for mutations that lead to certain types of hypocalcemia and neonatal hyperparathyroidism, in addition to Alzheimer’s disease and some cancers. Read More »

ATLANTA—Led by Georgia State University, researchers have developed the first robust and noninvasive detection of early stage liver cancer and liver metastases, in addition to other liver diseases, such as cirrhosis and liver fibrosis. 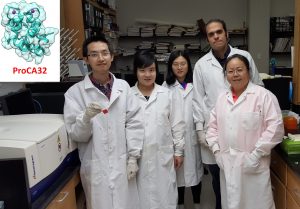 Their findings were published Wednesday (May 13) in Proceedings of the National Academy of Sciences.

More than 700,000 people are diagnosed with liver cancer each year. It is the leading cause of cancer deaths worldwide, accounting for more than 600,000 deaths annually, according to the American Cancer Society. The rate of liver cancer in the U.S. has sharply increased because of several factors, including chronic alcohol abuse, obesity and insulin resistance.

CDT Core Member, Dr. Ming Luo who has been awarded with a new competing five-year grant from the National Institute of Allergy and Infectious Diseases (NIAID). The project, titled Study of arenavirus assembly (1R01AI171426-01), will involve structural and functional studies of the rodent-borne human pathogen lymphocytic choriomeningitis virus (LCMV).

CDT Member, Dr. Unil Perera, has been selected as a Distinguished Lecturer for the 2020-2021 term by the IEEE Photonics Society Distinguished Lecturer Program. The program was designed to honor excellent speakers who have made technical, industrial or entrepreneurial contributions to the field of photonics and to enhance the technical programs of the IEEE Photonics Society Chapters. Read More >>

CDT Member, Dr. Suri Iyer has received a new NIH R61 award of approximately $1.35 million for the next three years (2019-2021) for his research project: “Towards point of care HIV detection using repurposed glucose meters”. This is exciting news for Dr. Iyer’s efforts in point of care detection and diagnosis of infectious diseases. Read More >>

CDT members Drs. Aimin Liu and Zhiren Liu have just been named Distinguished University Professors of Chemistry and Biology, respectively. This is an honor reserved only for a small percentage of faculty for their extraordinary contributions to research, teaching, and service.

Dr. Jun Yin’s recent work on SUMO has made the back cover of ChemBioChem. Read more »

Andrea Mahone is the Project Coordinator for The Center for Diagnostics and Therapeutics (CDT).