The CDT will hold a Special Seminar on Tuesday, January 29th, at the Petit Science Center in PSC124. Please join us to hear Dr. Fred Quinn from the University of Georgia College of Veterinary Medicine. His talk is entitled “Interaction of Mycobacterium Tuberculosis Bacilli With Alveolar Epithelial Cells”.

Fred Quinn received his BS degree from Marquette University in 1980 and his MS and PhD degrees in Microbiology and Biochemistry from Indiana University, Bloomington in 1982 and 1985, respectively.  He then pursued 18 months of postdoctoral training at University of Tennessee School of Medicine with Paul Hoffman and Ed Beachey and three years at Stanford University School of Medicine n the laboratories of Lucy Tompkins and Stanley Falkow. Both postdoctoral projects focused on defining genetic virulence mechanisms for a number of bacterial pathogens including Campylobacter jejuni and Legionella pneumophila. In 1990, Dr. Quinn became Head of the Molecular Biology Laboratory in the Meningitis and Special Pathogens Branch at the Centers for Disease Control and Prevention (CDC) and in 1993, he became the first head of the newly created Emerging Bacterial and Mycotic Diseases Laboratory Section.  In 1997, he led the Tuberculosis and Mycobacterial Diseases Pathogenesis Lab also at CDC. These groups were responsible for coordinating efforts to control new and re-emerging US and international bacterial diseases including Brazilian Purpuric Fever, Cat Scratch Disease, meningococcal meningitis, Buruli ulcer, and ultimately tuberculosis. During this period of time, he was involved in various outbreak investigations including what ultimately became known as the Hanta Virus outbreak in Arizona in the early 1990s and Buruli ulcer investigations in Ghana and Côte d’Ivoire in the mid 1990s. In 2000, Dr. Quinn became a Fullbright Fellow studying tuberculosis pathogenesis in Great Britain at the University of Bristol and Imperial College, London. In early 2002, Dr. Quinn left CDC to become Professor and Head of the Department of Medical Microbiology and Parasitology (now Infectious Diseases) in the College of Veterinary Medicine at the University of Georgia, Athens.  The department is currently comprised of 44 faculty members, and over 120 research fellows, students and support personnel who study host-microbial interactions, and develop appropriate animal models, vaccine candidates, diagnostic tests and novel therapies for many parasitic, viral and bacterial human and veterinary emerging and zoonotic pathogens.

There will be a Meet and Greet at 12:45pm with coffee and cookies.

I look forward to seeing you there, 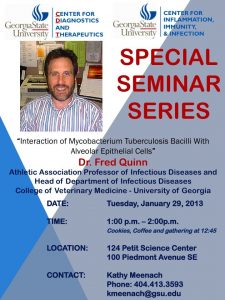