The next CDT Seminar will be held Thursday, April 18th, at 1:00pm at the Petit Science Center in PSC124. Please join us to hear Dr. Julie Robinson ISS Chief Scientist for the NASA Johnson Space Center. Her talk is entitled “International Space Station Science Lecture: Research Opportunities in Space and Benefits to Humanity”.

Dr. Robinson serves as the chief scientist for the ISS Program, representing all ISS research disciplines and providing information and recommendations both inside and outside of the agency. She chairs the ISS Program Science Forum, made up of the senior ISS scientists for each of the primary space agencies comprising the space station international partnership. She also represents NASA at the multinational agency ISS User Operations Panel.

Dr. Robinson began her career at NASA Johnson Space Center (working for Lockheed Martin) in the Image Science Laboratory. She collaborated with ecologists and conservation biologists in incorporating remote sensing data into their projects and led the initial development of the award-winning Gateway to Astronaut Photography of Earth on the World Wide Web (http://eol.jsc.nasa.gov). In 2004, she led a major NASA-sponsored scientific project to facilitate a distribution network for global maps of coral reefs (http://eol.jsc.nasa.gov/Reefs/) based on NASA data and projects. She was assistant editor of the book Dynamic Earth Environments: Remote Sensing Observations from Shuttle-Mir Missions (Wiley 2000), and author of the textbook Remote Sensing for Ecology and Conservation Biology (Oxford University Press 2010).

Dr. Robinson has an interdisciplinary background in the physical and biological sciences. Her professional experience has included research activities in a variety of fields, including virology, analytical chemistry, genetics, statistics, field biology, and remote sensing. She has authored over 50 scientific publications. She earned a Bachelor of Science in Chemistry and a Bachelor of Science in Biology from Utah State University in 1989. She earned a Doctor of Philosophy in Ecology, Evolution and Conservation Biology from the University of Nevada Reno in 1996.

There will be a Meet and Greet from 11:45am – 1pm with coffee and cookies.

I look forward to seeing you there, 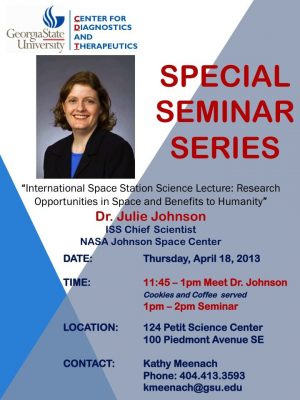