A CDT Special Seminar will be held Wednesday, September 4th, at 1:00pm at the Petit Science Center in PSC124. Please join us to hear Dr. James Lillard (http://www.msm.edu/academic/microbiology/faculty/James_Lillard.aspx) from the Department of Microbiology, Biochemistry & Immunology at Morehouse School of Medicine.  His talk is entitled “XPclad Nanoreformulation of Cisplatin for Prostate Cancer”.

Dr. Lillard completed his B.S. degree in Electrical Engineering & Computer Science from the Ohio State University in 1988 and worked as a product development engineer for IBM from 1988 to 1992. He received his Ph.D. in Microbiology & Immunology from the University of Kentucky School of Medicine, where he studied Yersinia “plague” pathogenesis from 1992 to 1996 under the direction of Robert Perry, Ph.D. Dr. Lillard completed his post-doctoral training from 1996 to 1999 in mucosal immunology under the direction of Jerry McGhee, Ph.D. at the University of Alabama at Birmingham in the Department of Microbiology. Subsequently, he worked as an Assistant and Associate Professor in the Department of Microbiology, Biochemistry, and Immunology at MSM from 1999 to 2006 and completed an Executive MBA focused on Biotechnology & Healthcare from the Goizueta Business School at Emory University from 2001 to 2002.

Research Interests
Dr. Lillard is an immuno-biologist that uses both in silico and in vivo methods to develop biologics, humanized antibodies, vaccines,  and  nanoparticles  to  diagnose,  prevent,  and/or  treat  (prostate,  breast,  and  ovarian)  cancer  and  infectious diseases. His research contributions span multiple disciplines including oncology, vaccine development, biodefense, and neuro-inflammation. Dr. Lillard’s cumulative peer-reviewed funding principally directed over his scientific career exceeds $22m and he has authored over 302 scientific communications, which have been cited over 2,500 times. These communications include: 62 publications, 83 patent applications (including 21 issued patents), 65 invited lectures, and 92 poster  presentations.  Dr.  Lillard’s  articles  have  appeared  in  International  Journal  of  Cancer  Research,  Clinical  Cancer Research, Journal of Clinical Investigations, Journal Immunology, Laboratory Investigations, and Proceedings of the National Academy of Sciences USA. His work is nationally and internationally recognized as indicated by his service on editorial boards and scientific review for the National Institutes of Health, Department of Defense, and United States Food & Drug Administration  advisory  panels  and  study  sections.  Dr.  Lillard’s  long-term  career  goals  are  to  be  actively  involved  in academic research and teaching, while contributing to enterprises that can benefit from his background expertise and experiences. 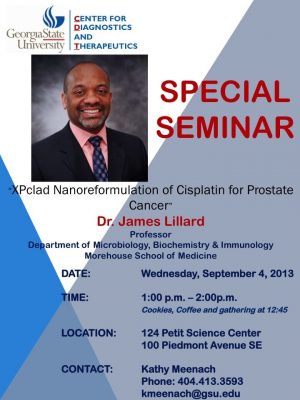