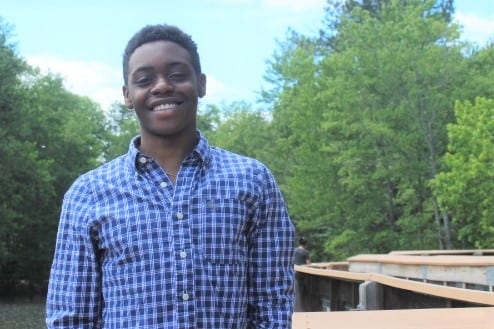 Andrew Browne received his Bachelor of Science degree in Chemistry (Biochemistry) from Georgia State University in 2019. He is a second-year chemistry PhD student in Dr. Suri Iyer’s laboratory currently working on characterizing the binding of multiple small molecule dual inhibitors to their oncoprotein targets by utilizing crystallography. Fully characterizing and understanding how the small molecules bind to their targets could lead to alterations in the structures of the small molecules. These alterations could not only increase the affinity for their targets, but also could lead to the development of new molecules that can more feasibly undergo large-scale synthesis.

Amany Elsharkawy received her Bachelor of Science degree in Biomedical Sciences from the Rochester Institute of Technology in New York in 2020. She came to the United States in 2016 after receiving a fully-funded scholarship from the USAID to finish her undergraduate degree. During this time, she worked as an organic chemistry teaching assistant which not only deepened her understanding of the subject, but also fueled her interest in organic synthesis and its applications. In 2017, she worked as an intern at Biomed Pharmaceutical in Research and Development where she focused on the processes of drug synthesis and purification. In 2018, she worked with Dr. Irene Evans on near infrared molecules to target prostate-specific surface antigens using a human carcinogenic cell line. The ability of cancer cells to express antigens was exploited to visualize the binding of Targeted Molecular Imaging Agents to the expressed surface antigens via confocal microscopy. While working on this project, she developed a special interest in fluorescent agents and their therapeutic applications in the medical field. In Fall 2020, she will be joining Dr. Mukesh Kumar’s lab at Georgia State University as part of the PhD Biological Sciences program.

Her research interests also include developing and synthesizing small fluorescent molecules which can be utilized as anticancer agents that can interfere with the malignancy formation. She ascertains that scientific research in imaging techniques will make it possible to advance current treatments and further introduce unpreceded clinical therapeutics.

Oluwafoyinsola Faniyi received her Bachelor of Science degree in Biochemistry from the University of Lagos, Nigeria in 2016. While undergoing her undergraduate studies, she interned with the Pharmaceutical Chemistry Laboratory at the College of Medicine, UNILAG, as an Industrial Trainee and was engaged in quality control and analysis of drug and food samples using analytical methods. She conducted her undergraduate thesis under the tutelage of her Research Supervisor, Dr. Wahab Okunowo, where she worked on the proximate analysis of edible insect larvae to serve as an alternative cheap source of protein for less-advantaged societies. She also voluntarily assisted PhD candidates on elementary aspects of their research on analysing antimicrobial properties of fungi extracts for therapeutic explorations. Understanding that refractory maladies known to man are manifestations of aberrant expression of genes, mutations, or epigenetic factors and metabolic disorders spurred her interest into furthering her education and specializing in researching prophylaxis and the cure of maladies.

Foyin proceeded with a Masters’ program in Chemistry with an interest in Drug Discovery and Development. She is a second-year Chemistry Master’s Thesis student in Dr. Ming Luo’s laboratory, currently working on employing X-ray Crystallography technique in the structural studies of antitumor compounds that target oncoproteins and proteins that play major roles in tumour suppression. These structural studies can help determine the binding mechanism of potential therapeutic compounds and protein targets to enable adjustments to be made to such compounds for further development. The field of drug discovery excites her because it will always embrace novelty. In her spare time, Foyin enjoys volunteering with Educational, Environmental, Health and Non-profit organizations. She engages in pro-bono consulting with Community Consulting Teams (CCT Atlanta) to assist local non-profits in assuaging educational situations among African American communities. With her partner, Peace Bamidele, she co-founded an education non-profit that pursues the advancement of social and emotional learning in Nigeria. Foyin is a deep lover of Jesus.

Savannah Jacobs received her first bachelor’s degree in vocal performance from Virginia Commonwealth University, 2012. In 2020, she received her second bachelor’s degree in chemistry from Georgia State University. While attending, GSU, she has also spent the last 5 years working in the 911 system at Grady Emergency Medical Services as an Advanced EMT and fought on the frontlines of the COVID-19 pandemic.

In 2021, she began her Ph.D. at GSU in Dr. Yin’s lab. She is currently verifying novel substrates for the E3 ubiquitin ligase Parkin in addition to exploring proteomics of additional E3 ligases such as Rsp5, Tom1, and BRCA1/BARD1 through the Yin laboratory’s novel Orthogonal Ubiquitin Transfer cascade (OUT). When she is not working, she spends her time writing songs and musical scores for local films or curling up with her husky, Khaleesi to read fantasy novels.

Jacques Kumutima graduated from Morehouse College in Atlanta with a Bachelor’s in Chemistry and two minors of Mathematics and Biology. He also received Howard Hughes Medical Institute (HHMI) and Rwanda presidential scholarships. While at Morehouse, he became interested in researching protein biochemical mechanisms and worked in organic synthesis in Professor Brian Lawrence’s laboratory studying the three-dimensional structure of amino acids and peptides via NMR spectroscopy. While continuing research in this laboratory during all academic years, he was also selected to work in other various labs as an intern. At Washington University in St. Louis, in Professor Garland Marshall’s lab, he conducted computational simulations to design and synthesize cyclic tetra-peptides as reverse-turns mimetic toward potential therapeutics for malaria. At Georgia Institute of Technology, in Professor Andres J. Garcia’s lab, he developed computational methodologies to determine the mechanical properties that cells exert to the extracellular matrix in order to understand cell shape and function. At Princeton University, in Professor Joshua Shaevitz’s lab, he conducted computational mapping of the stereotyped behavior of freely moving fruit flies using Mat Lab software in order to understand the sex and age-related behavioral changes in the Drosophila melanogaster. These strong research experiences and training have moved him further to pursue graduate studies to understand the structure-function studies of biomolecules such as proteins. In addition, Jacques has earned a Master’s degree in biophysics from the University of Michigan – Ann Arbor. While there, he worked on two projects that resulted in publication. He investigated studies on Myoglobin interaction with hydrogen sulfide and the effects of mutations on Neuroglobin interaction with hydrogen sulfide; and he also has industry experience at Mead Johnson where he worked on electrochemical detection of choline in baby formula.

Jacques is currently a PhD candidate in computational biophysical chemistry working under the supervision of Professor Donald Hamelberg here at Georgia State University. His focus is on various forms of molecular dynamics to the understand the catalysis of Cyclophilin D(CypD), which is a drug target for various types of cancer. His work on CypD was recently published: “p53 Is Potentially Regulated by Cyclophilin D in the Triple-Proline Loop of the DNA Binding Domain”.